Join Us for the 32nd Ham & Yam Festival

It's time for the Smithfield Ham & Yam Festival in Downtown Smithfield, scheduled for May 7th with a wealth of activities for the entire family. The Ham & Yam Festival is a celebration of the agricultural history of Johnston County. The area was once a rural farmland where hog farmers and sweet potato growers made a living. Because of this, the focus of the festival remains food. Attendees can find many varieties of hams and yams at the festival – barbecue from the cook-off, country ham biscuits, hot dogs, sweet potato fries, and yam desserts. For the complete schedule of events and all things Ham & Yam visit the official website.

We've managed to snag a recipe for you to try at home, but you can also get one while at the festival in May. The sweet potato mixes very well with sweet and savory flavors. Sweet potatoes are also nutritious. The smoothie will therefore be both good and good for you! 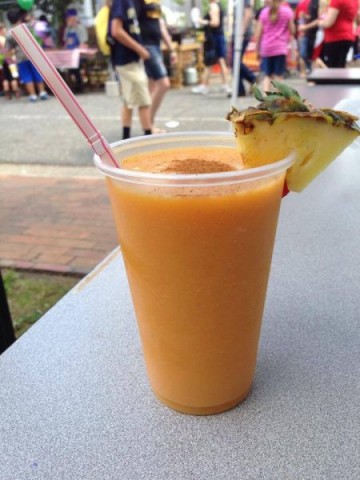 Courtesy of A Culinary Flair

Combine all ingredients in a blender and blend on high to a smooth creamy consistency.
Adjust taste by adding sugar, cinnamon and ginger.
You can substitute frozen strawberries instead of fresh.
Pour into a 10-12 ounce glass and enjoy a healthy drink.

Ham & Yam is also about family fun and entertainment. There are craft vendors, as well as games and rides. Three stages include performances throughout the day. James Wesley will headline this year. The concert is free and is scheduled for 8:00 p.m. on Saturday, May 7. With his whiskey-smooth voice, Wesley sings directly to real people about real things that profoundly affect real lives—and from his small-town upbringing to his blue-collar work ethic, he has a deep understanding of what those folks are longing to hear.

One of the top rising stars in country music, Wesley found a new level of exposure as the opening act for Taylor Swift’s Speak Now Tour, and has released several singles. In 2015, Wesley partnered with Calcutta to produce the single and music video “Hooked Up,” a song inspired by anglers who chase blue marlin at the legendary Big Rock off the coast of Morehead City. You can see that video below.