Buy a Bottle at Broadslab

We have reached at least a temporary closing to our Meet the Makers. Broadslab Distillery is the last of the Beer, Wine, and Shine Trail locations to be discussed in this blog series. Broadslab's owner and master distiller Jeremy Norris is the last maker in Johnston County to fall under the craft beverage industry. However, that does not mean that Jeremy is the last maker I will have the privilege of sitting down with. It is my hope to extend the Meet the Makers series into other blogs, regarding artisans and artists throughout the county. So, stay tuned. Meanwhile, onward with boasting about Broadslab!

One For The Road

Craft distilling is a growing industry across North Carolina. And like wineries and breweries, distilleries not only boost the econo 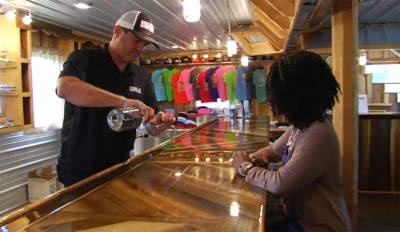 my through production and sells, but through drawing tourists to the state who are interested in tasting vodka, bourbon, gin, whiskey, and authentic southern moonshine. North Carolina has always been, shall we say, notorious for the illegal home brewing of such beverages, but distillers have been able to legally make it (with the proper permits) for years now. But, did you know, that distillers have not always been able to sell their own product on-site at the distillery until this month?

Benson-based Broadslab Distillery has been offering tours and tastings since March of this year. But, in order to buy the product, visitors to the property where Jeremy makes his "shine" would have to leave the farm and drive into Benson, to the nearest ABC store, to lay their hands on a full bottle of product. This year NC legislators voted to change that. For the first time in over 100 years, visitors to Broadslab can purchase a bottle of shine from Jeremy.  One bottle. Per person. Per year. For those visitors from states with more liberal alcohol laws this may sound restrictive. But for the members of the North Carolina Distillers Association it's a step in the right direction... and hopefully a singular step on a longer path to making our state a mecca for visitors looking to experience authentic southern liquor.  I invite you to visit and give Broadslab a try. You can now take one for the road! The tasting room is located right off I-95 in Benson, NC near the intersection of I-40 and I-95. This makes Broadslab convenient from the Triangle if you're looking for things to do in Raleigh or you want to expand your tour of Raleigh distilleries.

Update: due to a new NC law, visitors to Broadslab can now purchase unlimited bottles of product at the distillery.

Jeremy is what we would dub the "real deal", with a back story about growing up in a family of moonshiners in a community known for the trade. 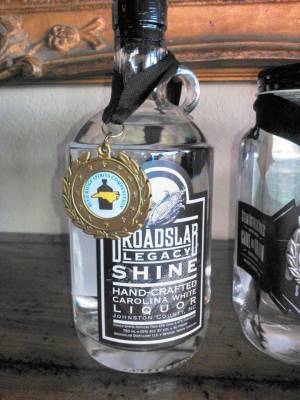 Unlike some distilleries in the state using moonshine stories as a marketing ploy, Jeremy is building a brand whose story has honest origins. Jeremy was raised by his grandfather, and helped him on the farm for many years as he ran a produce stand there at the house, now the tasting room.  His grandfather's heart and hands and spirit tended the land and his shine stills once dotted the landscape back before Jeremy was born.

The Broadslab recipes are the embodiment of a 5 generation legacy and were passed down by the great-great grandfathers on both sides of Jeremy’s family. One of them, William “Bill” McLamb, was active in the dawn of the moonshine trade and distilled smooth, sipping whiskey long before prohibition. But it was Jeremy’s grandfather, Leonard A. Wood, who eventually passed on the family recipe.

Once moonshine became legal in NC Jeremy saw the opportunity for his family to turn a lawless legacy into a labor of love operation. His grandfather Leonard finally agreed to share his knowledge, recipes, and oral shine history. And so they toiled together, perfecting the process and arguing between decades of tradition and modern techniques. As Jeremy’s mentor and personal advisor, Leonard was integral in building the Broadslab still, but passed away before opening. Since then, Jeremy has purchased land from his family to own the farm his grandfather loved so much.  Jeremy has roots in the land like many other Johnston County farmers. The distillery sits in the footprint of many of his stills on the family farm outside Benson, NC.

From Dirt to Bottle 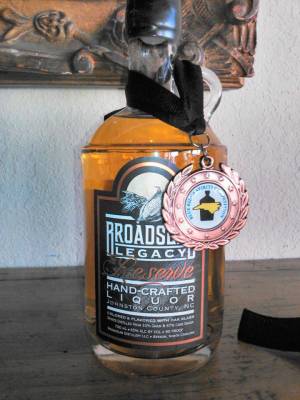 As far as Jeremy knows, he is the only distillery in the state that is growing the grain, harvesting and processing it, and making it all with natural ingredients. If you're standing in the Broadslab tasting room, you're standing on the land that the corn in your whiskey was grown on. There will be no additives, artificial ingredients or syrups in Broadslab products.  Some are even considered organic for those foodies that seek out that designation. But, there are some other important "organic" ingredients to Broadslab Distillery's product that make it truly one of a kind. The hand-crafted love that goes into every step in the process is one ingredient. From "dirt to bottle", Jeremy is the engine behind the process putting that drink in your hand.

Jeremy's grandfather told him there are two kinds of shine, the shine you sell and the shine you drink.  Jeremy is making the shine you drink.  He has altered the methods his grandfather used to pour off the harsh chemicals that are in front of the "drinking shine", and he cuts off the still before the bitter taste at the bottom effects the product.  This "sweet spot" so to speak is the fine product Jeremy is producing. Jeremy has remarked more than once that his grandfather would get upset that Jeremy was "wasting" a portion of the product in order to craft a better taste. While Jeremy understood the practicality behind his grandfather's idea, he wanted his product to be a smooth as possible. 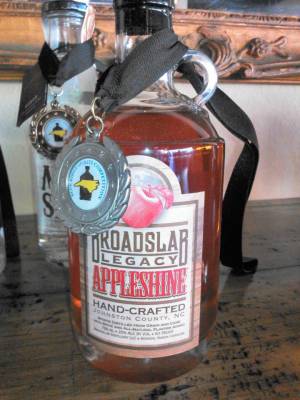 The hand-crafted glass of Broadslab shine or rum you sip on in the tasting room doesn't just have your basic white lightening ingredients in it. It has the weight of a war between the lawful and the lawless. The sense of secrecy as hands toiled to distill in the dead of night or run boxes up the river under cover of darkness. The smell of wild southern nights, gun smoke, and pure grain alcohol. The taste of sizzling lightening tempered by time and passion into a smooth and robust drink.

If you don't believe me, believe the judges at the Blue Ridge Spirit Competition this year. Jeremy took home Gold for his Legacy Shine, Silver for his Apple Shine, and Bronze for his  Reserve Legacy Shine. Congrats to Jeremy and Broadslab!

Visit Broadslab Distillery for the shine and you certainly won't be disappointed.  But stick around for the stories and you'll find yourself perched on the barstool long after the shot glass in your hand runs dry. The tasting room is open Thursday through Saturday, starting at 12N, with tours, tasting, and shot glass for $12.00. Find out more at -- www.broadslabdistillery.com.