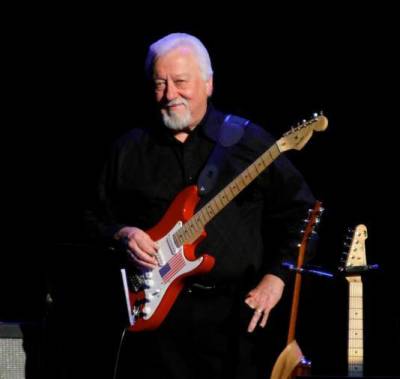 Long before Jimmy Capps was an accomplished guitarist and staple performer at the Grand Ole Opry, he was a kid in Benson who listened to the Opry over the radio with his father on Saturday nights.

“There was a certain magic about the guitar that drew me to it,” Capps said. “I knew I had to figure out a way to learn how to play.”

Since he began playing guitar at age 12, Capps has performed on thousands of country music tracks, and he has long been a member of the house band at the Grand Ole Opry. It’s a resume that has earned him a place in the N.C. Music Hall of Fame. His induction will take place Oct. 16 at the Gem Theater in Kannapolis.

Born in Fayetteville in 1939 and reared in Benson, Capps began playing guitar and performing professionally before he was a teenager. His first gig was at radio station WCKB in Dunn, where he played for free but didn’t care.

“I was in show business,” he said.

That gig led to a series of television and radio engagements across North Carolina and, at one point, in Florence in neighboring South Carolina.

Then, at 19, Capps got his big break. The Louvin Brothers hired him as a guitarist, and he moved to Nashville, where he later became a session musician and Grand Ole Opry band member.

Capps’ guitar work has appeared on such country music recordings as Alan Jackson’s “Here in the Real World,” Conway Twitty’s “Red Neckin’ Love Makin’ Night” and John Deniver’s “Some Days Are Diamonds.” He has appeared on TV in the People’s Choice Awards, “That Good Ole Nashville Music” and on “Larry’s Country Diner.”

Since 1967, Capps has been a member of the Grand Ole Opry staff band, and he plays there every week, with no signs of stopping.

“It’s like a country club,” said his wife, Michele Voan Capps. “You get to play music with all of your friends.”

The N.C. Music Hall of Fame induction is the latest of many honors for Capps. In 1998, he came to Benson for a special performance where state Sen. Charlie Albertson proclaimed May 25 “Jimmy Capps Appreciation Day.” Eleven years later, Benson Mayor William Massengill declared Feb. 25, 2009, “Jimmy Capps Day” in front of a crowd gathered to celebrate Capps’ long run at the Grand Ole Opry.

In 1996, he was named to the Order of the Long Leaf Pine, North Carolina’s highest civilian honor. Capps has also been inducted into the Musicians Hall of Fame and Country Music Hall of Fame, both in Nashville.

Capps learned of the N.C. Music Hall of Fame and Musicians Hall of Fame honors in the same week. His wife said he was speechless.

“They actually brought him out on the front stage, and they told him about this induction (into the N.C. Music Hall of Fame),” Michelle said. “His mouth just flew open. They said, ‘Would you like to make a speech?’ And he said, ‘Oh, that was it!’ ”

Capps said the hall of fame honors mean a lot to him. “I feel like I’m in pretty high cotton in both halls of fame,” he said. “The North Carolina Music Hall of Fame has some very important people in there – Andy Griffith, Don Gibson – tons of people who are famous.

“For your home state to [recognize you], that’s really the high rung on that ladder.”

Above all else, Capps said, he prides himself on loyalty to his employers and his work ethic.

“There could be an artist that’s recording and he’s brand new and he’s trying to get a chance – I would work just as hard for him as I would Conway Twitty. I see no difference,” Capps said. “It’s my work that’s going to be put down on that track. I want it to be as good as it can be for that person or that company.”

Reprinted from The Smithfield Herald,
By Laura Finaldi
September 22, 2014